Woman Loses 2 Sons in One Night to Opioids 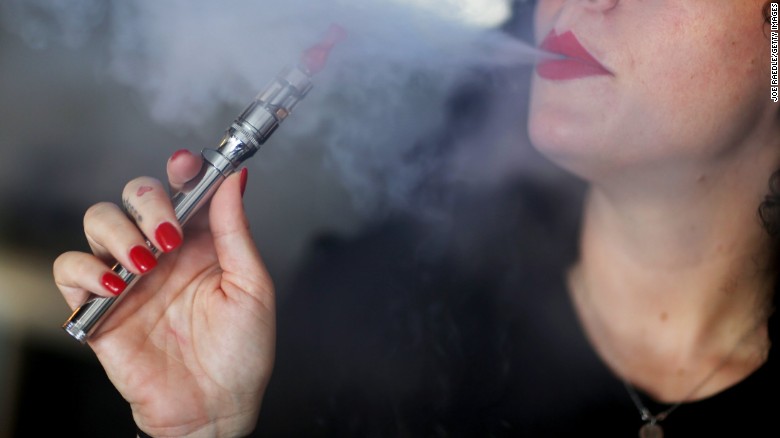 (CNN) – An 18-year-old woman working as a hostess in a rural Pennsylvania restaurant decided to try e-cigarettes, perhaps another of the innumerable bistro workers hoping to calm frayed nerves with a smoke — or in this case, a vape.

This hostess, though, paid an unusual price for her e-cig use, according to a case study published Thursday in the medical journal Pediatrics. As usual for a patient report, the authors did not disclose the young woman’s name to protect her privacy.

E-cigarettes heat liquid and turn it into vapor, which a user inhales and then exhales in a large puffy cloud. The liquid is known as e-juice, and it contains flavorings, propylene glycol, glycerin and often nicotine — though many users are unaware of this final addictive ingredient.

The hostess had been vaping for only about three weeks last year when she developed symptoms bad enough to send her to the emergency room of the University of Pittsburgh Medical Center.

There, doctors recorded her issues: cough, difficulty breathing that was worsening by the minute, and sudden stabbing pains in the chest with every inhalation and exhalation. Not yet feverish, she showed no upper respiratory symptoms such as a runny nose or nasal congestion. In the past, she said, the only lung problems she had were from mild asthma, which rarely required the use of an inhaler.

When her coughing became more frequent, the ER doctors admitted her to the pediatric intensive-care unit and started her on antibiotics. But her condition rapidly worsened.

Soon, the young woman experienced what is commonly known as respiratory failure, said Dr. Daniel Weiner, one of the patient’s doctors, a co-author of the new report and a medical director at Children’s Hospital of Pittsburgh at UPMC.

“She was unable to get enough oxygen into her blood from her lungs and required a mechanical ventilator (respirator) to breathe for her until her lungs recovered,” Weiner said.

Not only did the hostess require a breathing machine, she needed tubes inserted on both sides of her chest to drain fluid from her lungs.

Her doctors diagnosed hypersensitivity pneumonitis, sometimes called wet lung, an inflammation of the lungs due to an allergic reaction to chemicals or dust.

Dr. Casey Sommerfeld, the patient’s pediatrician and lead author of the study, said chemicals in the e-cigarettes led to lung damage and inflammation, which triggered the woman’s body to mount an immune response.

“This immune response can lead to increased inflammation and ‘leaky’ blood vessels, which can lead to fluid accumulation in the lungs,” said Sommerfeld, now a general pediatrician at Children’s Healthcare of Atlanta.

‘More case reports and side effects’

The woman was treated with an IV of methylprednisolone, a drug used to treat severe allergic reactions.She improved swiftly and was weaned off the mechanical support system five days after being admitted to the hospital.

“Ilona Jaspers, a professor in the Departments of Pediatrics and Microbiology and Immunology at the University of North Carolina at Chapel Hill, said the case study suggests that e-cigarettes will cause negative health consequences that had not been seen with conventional cigarettes.

Jaspers, who was not involved in the study, added that even though it describes just one patient, it “highlights the importance of potential adverse health effects associated with e-cigarette use.”

Additionally, the diagnosis of symptoms related to a number of serious lung conditions suggests that the negative health effects of e-cigarettes may “manifest in several different ways,” she said.

Her research has shown that certain e-cigarette flavor chemicals significantly reduce the function of immune cells.

Sommerfeld noted that, as vaping products contain nicotine, “vaping can cause side effects including dizziness, headaches, nausea, racing heart, anxiety and difficulty with sleep. Nicotine is known to be addictive, and children can become hooked on electronic cigarettes.”

“I hope we can find a way to quickly reverse this trend,” Jaspers said.

Sommerfeld agreed. Using e-cigarettes “normalizes” smoking, she said, and is linked to an “increased likelihood of using typical cigarettes or tobacco products.” For this reason, vaping and electronic cigarette use should be included in discussions of “risky behavior” with teens, she said.

“As a pediatrician, I am always a child advocate and seeking to speak out on the best interest of children.”