Thanksgiving: A Time For Celebration And Caution 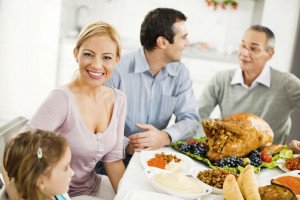 With turkey, football games, and getting together with family and friends, the Thanksgiving holiday weekend is exceptionally busy.  This is also a time when there are more opportunities for binge drinking to become a problem for underage youth, young legal drinkers home for the holidays getting together with friends, and adults.According to SAMHSA’s National Survey on Drug Use and Health (NSDUH):

The holidays can turn from a time of celebration into a time of tragedy because of the surge in underage drinking. What can parents do?  First of all, make your disapproval of underage drinking very clear.  It’s not an option, is not acceptable, and is illegal. We’ve seen time and again that parents and adults have a big influence on children’s decisions not to drink. In fact, SAMHSA has an online guide (PDF) to help parents and caregivers clearly communicate their expectations and create an action plan.  Additional information and materials on how to help prevent underage drinking are available at http://www.stopalcoholabuse.gov/.

For adults of legal drinking age, it’s important that as you celebrate this holiday season to look at your drinking habits and how they may affect your health.  http://rethinkingdrinking.niaaa.nih.gov/