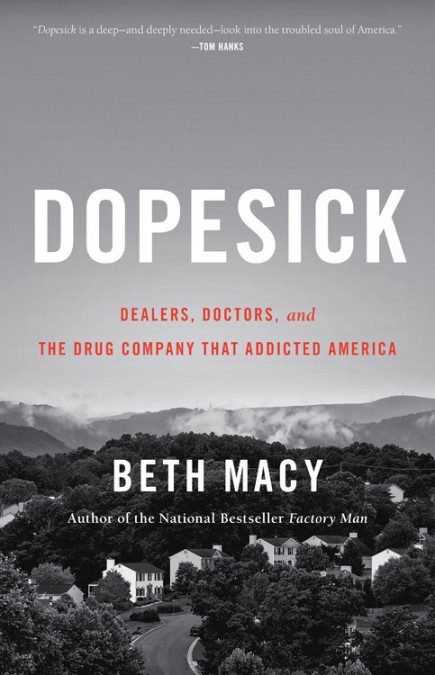 Special to The Seattle Times

The deadliest drug epidemic in American history hits home every day. Bodies slumped over in bathrooms, in parking garages, in classrooms, on the floor in bedrooms while the rest of the family sleeps. Two parents overdosed at their daughter’s softball practice in West Virginia. A Philadelphia man who suspected his son might be smoking a little weed came home to find paramedics on his lawn. His son was gone, they told him, overdosed on Oxy, a word he didn’t know.

“The first time Ed Bisch heard the word ‘OxyContin,’ his son was dead from it,” Beth Macy writes in “Dopesick: Dealers, Doctors, and the Drug Company That Addicted America.”

The numbers are overwhelming: 63,632 Americans died of a drug overdose in 2016, according to the Centers for Disease Control and Prevention. Almost two-thirds of those deaths were from a prescription or illicit opioid, and the government report was unusually blunt: “America’s overdose epidemic is spreading geographically and increasing across demographic groups.” Drug overdose, Macy writes, “is now the leading cause of death for Americans under the age of fifty, killing more people than guns or car accidents, at a rate higher than the HIV epidemic at its peak.”

Every number is a tragedy, another drop in the river of heartbreak that’s washing over our country and changed the way we live.

“If you live in a city, maybe you’ve seen the public restroom with a sharps container, or witnessed a librarian administer Narcan,” Macy writes. Day-care workers in Portland, where I live, search around the playground equipment for needles and drug paraphernalia before letting the kids out on sunny days. Addicts ride back and forth on the light-rail trains, their possessions gathered around them.

If you live in the country, maybe you’ve seen your community swamped with prescription drugs. Kermit, a West Virginia coal town with a population of 392, had almost 9 million hydrocodone pills shipped to a single pharmacy, with predictable consequences: an explosion of fatal overdoses.

If you live in the suburbs, and especially if you have kids in high school, you’ve probably heard about someone like Colton Banks, a popular, athletic, sweet-natured young man who overdosed on prescription painkillers while his parents were at church. He was supposed to see an addiction specialist the next day — “He’d stuck not one but two Post-it notes on the dashboard of his car reminding him to go,” Macy writes.

“Dopesick” grew out of reporting Macy did at The Roanoke Times and has an Appalachian focus that grounds its first section, on how Purdue Pharma, the maker of OxyContin, aggressively marketed the drug to rural communities in the region and minimized the risks of addiction. A few doctors and community activists challenged the company, which brought in Rudy Giuliani for some damage control after the first wave of lawsuits. Purdue Pharma made billions on OxyContin, money that came directly from death and destroyed lives. Oxy and other painkillers are highly addictive and are a gateway to heroin. When Oxy finally was reformulated in 2010, making it more difficult to abuse, younger addicts turned to a cheaper, more powerful, easier-to-obtain street drug — heroin.

Heroin is everywhere, and it’s not going anywhere. Fentanyl, another painkiller that’s often mixed with heroin, is 30 to 50 times more potent and is responsible for almost half the drug-overdose deaths in the U.S., according to the National Institute on Drug Abuse.

Macy writes: “The rate of casualties is so unprecedented that it’s almost impossible to look at the total number dead — and at the doctors and mothers and teachers and foster parents who survive them — and not wonder why the nation’s response has been so slow in coming and so impotently executed when it finally did.”