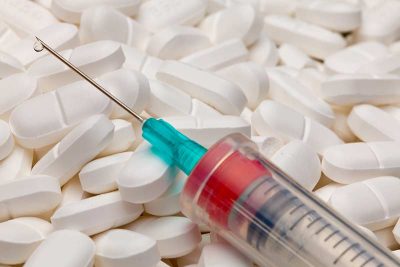 Prescriptions for addictive painkillers have gone down in all 50 states. However prescriptions for the drug that can reverse opioid overdoses reached a record high the first four months of 2018, according to a new report released by the American Medical Association.

Opioid prescriptions decreased 22 percent nationwide, and nearly 26 percent in Wisconsin between 2013 and 2017. But as painkillers get more difficult to get, people are turning to other illicit drugs with higher potencies — sometimes leading to overdoses.

From January through April 2018, the number of naloxone — which often is referred to by one of its brand names Narcan — prescriptions purchased reached a record high in the United States. Naloxone can treat an opioid overdose.

“It’s interesting because the number of overdoses in the state of Wisconsin last year actually increased 27 percent but the number of confirmed deaths from those overdoses actually dropped by 3 percent. We believe a lot of that is because of the ready availability of naloxone,” said Dr. Michael McNett, medical director for pain quality standards at the Aurora Medical Center in Milwaukee. He also chairs the Wisconsin Medical Society’s opioid task force.

Despite progress in getting doctors to limit opioids — or consider alternatives for a patient’s pain — the AMA says more needs to be done.

“The largest decrease in opioid prescriptions in 25 years reflects the fact that physicians and other health care professionals are increasingly judicious when prescribing opioids. Unfortunately, deaths related to heroin and illicit fentanyl, and to prescription opioids, continue to rise,” Dr. Patrice Harris said in the report. Harris is on the American Medical Association’s Opioid Task Force.

These statistics prove that decreasing prescriptions alone will not end the epidemic,” Harris said. “We need well-designed initiatives that bring together public and private insurers, policymakers, public health infrastructure and communities with the shared goal to improve access and coverage for comprehensive pain management and treatment for substance use disorders.”

Across the country, those unable to get addiction treatment ranges from 77 percent to as high as 94 percent. In Wisconsin the report estimates that as many as 89 percent of addicts cannot get treatment.

The report recommends that patients have access to affordable, non-opioid pain care. And that insurers stop requiring prior authorization for FDA-approved forms of medication-assisted treatment.

More doctors in the U.S. are getting certified to provide buprenorphine, which can reduce cravings and withdrawal symptoms. There was a 42-percent increase in certifications in the last year, according to the report.

“But we need quite a few more in Wisconsin. I think we are a long way yet from having an adequate number of physicians prescribing various types of therapy,” said McNett.

Prescription drugs have played a large role in the epidemic and nearly every county in Wisconsin has plans to file a lawsuit against prescription drug manufacturers.

Counties are looking to be reimbursed for the costs of responding to the opioid crisis from increased law enforcement to health and social services.

“I’ve been shocked at how much doctors have been sold completely false information about opioids and how effective they are. The research demonstrates once a patient has been on an opioid for more than two months, the level of benefit of those opioids provide is less than a patient would even be able to (notice),” said McNett.

McNett added that there’s no evidence demonstrating that opioids are effective when used for more than two months.

Wisconsin Public Radio, © Copyright 2018, Board of Regents of the University of Wisconsin System and Wisconsin Educational Communications Board.