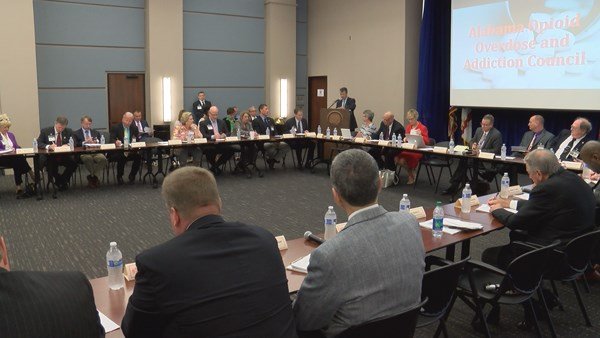 Key Alabama stakeholders connected to the opioid crisis met Tuesday, at the direction of Gov. Kay Ivey, charged with creating a strategic action plan to combat the state’s opioid crisis.

The subcommittee reports highlight a lack of information and resources at every facet of this fight, starting with the lack of authenticated data on opioid abuse and deaths. The lack of universal state data could prove the state’s opioid and heroin crisis is greater than expected.

“Anecdotally I hear that it is,” Attorney General Steve Marshall stated. “It is hard to find the data you need. Some of it is because it isn’t available, otherwise it’s kept in certain silos. One of the things that you saw was a comprehensive list of information I think that we need not only to assess the problem, but to see when we make a strategic plan with recommendations whether or not we are making a difference.”

Also an issue, the lack of scientific-based treatment programs and the role insurance plays in determining what addicts get treatment.

As for doctors, the state’s software that reports the latest opioid prescriptions filled for patients is updated slowly. Pharmacists are concerned about the repercussions of over-prescribing doctors anonymously.  “The pharmacists know who the abusive prescribers are,” stated Sen. Jim McClendon. “However, what is a pharmacists to do? We don’t have a clear-cut safe mechanism for reporting. The last thing a pharmacist needs to do is create a problem for someone who is sending them patients.”

The council’s strategic plan must be delivered to the governor by Dec. 31. It’s expected to make recommendations for change through legislation, policy and through community action.  “We see that in the data when we lose 147 people nationally every day, when you hear the stories from law enforcement, when you talk to ER doctors about the people who are coming through their facilities,” stated Marshall. “We know it is an issue, we know it is a problem.”

Tuesday’s meeting also marked a significant announcement for law enforcement. The state entered an agreement with Adapt Pharma on the purchase of Narcan nose spray for officers across the state. This agreement makes the cost of Narcan more affordable.

“Certain naloxone was almost too expensive or cost prohibitive to be carried,” Marshall explained. “This is one from an officer safety standpoint, we wanted to make sure we had an affordable option, one that was easily usable by law enforcement and we can say that their lives matter very much and we can get that in their hands.”